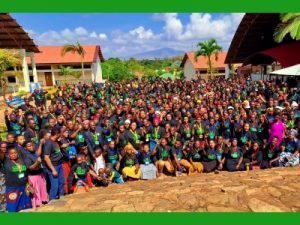 On November 17-18, over 400 smallholder farmers gathered for the 27th annual meeting of MVIWATA or the National Network of Small-Scale Farmers Groups in Tanzania. Peoples Dispatch spoke to them about their struggle for dignity and justice

Hundreds of smallholder farmers gathered in the city of Morogoro on November 17 and 18 for the 27th Annual General Meeting (AGM) of Mtandao wa Vikundi vya Wakulima Tanzania or the National Network of Small-Scale Farmers Groups in Tanzania (MVIWATA).

The organization was founded in 1993 by self-organized farmers in the wake of the country’s first Structural Adjustment Program (SAP) under the IMF and the World Bank between 1986 to 1989. The neoliberal reforms ushered in during this period marked an absolute departure from Tanzania’s centrally-planned economy under socialist president and leading anti-colonial figure Julius K. Nyerere.

In 1967, Nyerere issued the Arusha Declaration, committing Tanzania to the principles of socialism and self-reliance and paving the way for nationalization of key industries and the collectivization of agriculture. “The peasantry and the workers were declared as the engines of the Tanzanian economy, there was massive state investment geared towards them. Farmers were depending on the government and selling their produce through cooperatives,” Theodora Pius, the Head of Program at MVIWATA, told Peoples Dispatch.

However, this changed with the withdrawal of the state in the SAP-era reforms. At the same time, Pius added, while there were strong cooperatives of farmers growing cotton, tea, and coffee, other farmers growing maize and small grains were not a part of these collectives. Under these circumstances, MVIWATA was born. “Groups of farmers came together and decided that they would travel throughout Tanzania to call on peasants to unite and have a unified voice, to demand their inclusion in national policies, to demand better prices for our produce, and to provide alternatives on agricultural extension services. It was their dream to ensure that MVIWATA goes to every village in Tanzania,” Pius said.

Ensuring dignity and justice for farmers

MVIWATA has organized farmers stretching from groups at the grassroots all the way to a national network as the issues that it was founded to address three decades ago continue to persist in Tanzania today.

“The system that oppressed the farmers in the late 80s and the 90s is the same today, it has just changed faces. Our priorities have remained the same, we continue to speak on issues of land, on markets, on access to finance – just the context has changed,” Pius said. In response, MVIWATA has continued to update its strategies.

Leading up to this year’s meeting, the organization developed its 2022-2026 strategic plans, identifying six areas of priority. The first is to “retain the dignity of the farmers as a class.” The second area is agroecology and food sovereignty. “The agribusiness model has been used against our people, our rights, and the planet. This model has taken away our land, our seeds, our culture and our dignity,” Pius said.

“Agroecology and food sovereignty is an alternative system which tells us that farmers can produce in a just system that respects the rights of the producers and the consumers, the environment and biodiversity. It tells us that we can produce keeping in mind that food is a right, not just a mere product to be sold.”

In contrast, there has been a proliferation of agribusiness, Pius explained, with villages being told that conventional farming and agribusiness were the “missing link” for wealth creation for farmers.

MVIWATA is also organizing extensively around land rights and security amid growing evictions, land grabbing, land speculation, and with farmers not having access to land.

“Every day there are reports of evictions, of people being told to vacate their villages and move. The pressure of capital is pushing people from their lands. This is taking place under the guise of investments for the ‘national benefit’ but also through other, formalized means. The majority of people facing these evictions are farmers in rural areas,” Pius stated. “If a farmer is evicted but they want to remain on their land, they are allowed to stay but only if they cultivate particular crops wanted by the investors.”

Among the resolutions adopted at the AGM, farmers committed to strengthening their unity and advocacy for land issues, “especially in the Mbarali district where 21,000 farmers are facing threat of eviction,” she said.

Farmers also deliberated on existing legal mechanisms and how they can be used to ensure land security, and how MVIWATA could work to reduce conflicts among small scale producers on issues of land use as “access to land continues to shrink.”

Another key area of focus for MVIWATA is economic justice. “Farmers are producing under very difficult conditions and then when they go to sell their produce in the market the price they get is very low. Farmers do not have money to buy inputs, so the middlemen come in and offer some amount of money. When it is time to harvest, these middlemen take everything without regard to the existing market price,” she said.

In response, MVIWATA is trying to build savings and credit groups of farmers, and mechanisms and systems to ensure that farmers are getting a fair price, including through the collective selling of their produce. Resolutions adopted at the AGM also included a focus on strengthening financial services and cooperative groups for farmers.

“Organizations like MVIWATA are articulating a people’s answer to land, food, and agrarian questions,” Jonis Ghedi-Alasow, a member of Pan-Africanism Today and an international delegate at the MVIWATA meeting, told Peoples Dispatch. “They have demonstrated that the peasants of Tanzania are not only feeding the country, but are also, when organized, able to insist on a fundamental break with neocolonialism.”

Prior to the AGM on November 18, MVIWATA organized a workshop titled ‘The Future of Small-Scale Farmers in the Context of Investment and Free Market in Tanzania’ with three areas of focus – land, seeds, and markets. “The workshop saw several strong interventions – one, that farmers must produce products that can make them independent. This requires producing for the local market,” Ghedi-Alasow stated.

“In the past, solidarity among peasants in the global South made it possible to sell produce beyond our own countries without having to pay tariffs. There is a commitment to rebuilding these links of solidarity among peasants, particularly in Africa, to fight against debilitating tariffs on products that peasants are, in fact, exporting.” He added that there is also a renewed commitment to using local seeds, including from seed banks. At the AGM, farmers resolved to advocate for increased budgetary allocations towards agriculture aligned with the priorities of smallholder farmers along with pushing for a change in existing seed laws to also include local seeds.