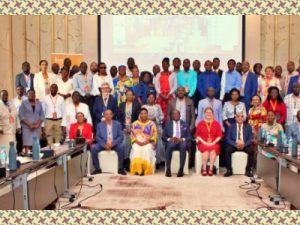 On Tuesday 25th November 2022, during the closing session of the regional ESA FAFO, Ms Elizabeth Nsimadala, Chair of the ESA steering committee, read out the Joint IFAD-FO declaration, which represents the joint commitment that will guide IFAD/FOs partnerships between November 2022 and end of 2024. The full declaration, including the action plans, is presented below.

This statement was developed by IFAD and FO representatives who participated in the second regional farmers forum consultative meeting; officially opened by Hon Antony Peter Mavunde, the deputy Minister for Agriculture of the United Republic of Tanzania at the Johari Rotana hotel in Dar es salaam; the declaration represents the commitment from the ESA division to pursue and strengthen the partnership with FOs. The Forum was attended by approximately 104 Farmers’ Leaders (61 physically and 43 virtually attending) from 17 countries and 33 National and regional farmers’ organizations, representing millions of small-scale farmers, artisanal fishers, organic farmers and pastoralists, who interacted with IFAD (ESA Regional Division teams and HQ staff) and five (5) IFAD funded projects from four (4) countries i.e. Lesotho, Kenya, Malawi and Tanzania.

The Forum centred around building sustainable partnerships and collaboration through ESA portfolio and explored opportunities presented by the new financing instruments and initiatives in IFAD (climate financing, private sector financing and ICT4D) to leverage resources to support smallholder farmers transform food systems. The post 2021 UN food systems actions were also discussed with a view of developing a common understanding of the implementation structure under the UNFSS global hub, progress made by IFAD, FOs and development partners (represented by FAO-TZ) in implementing the actions leading to country level UNFSS pathways. We also discussed the achievements made after the first ESA FAFO meeting held in 2017.

Prior to the two-day meeting of the forum a physical meeting of the Regional Steering Committee, whose membership currently draws from ESAFF, EAFF, SACAU, INOFO, WFF, WFFP, WFO, La Via Campesina and IFAD, was held to firm up the preparations for the regional FAFO, including finalization of the agenda and logistics.

Farmers’ Delegates appreciated the meeting held between the FOs leadership and the IFAD associate Vice President for External relations and Governance Ms Satu Santala; they also appreciated the efforts done by IFAD in promoting operational collaboration and dialogue with FOs at country, regional and global levels and especially support provided to farmers to mitigate COVID-19 impacts. Further to that, Farmers’ Delegates reiterated the centrality of partnering with IFAD according to the principles of inclusiveness, pluralism and heterogeneity as agreed since 2005 with the FAFO consensus document. Farmers’ Delegates further emphasized the need of strengthening country and regional level cooperation with IFAD by exploring opportunities around climate finance, private sector engagement and ICT4D.

The action plans are attached and are an integral part of the joint IFAD/FOs commitment. Elements of the national action plans comprised the following:

In parallel, a strategic discussion was held between the IFAD global/regional Rural Institutions team and representatives of regional, continental and global FOs to kick start a process of dialogue and reflection which will pave the way for 2024 Global FAFO, with some of the strategic elements of the regional discussion as below

This statement and the attached Action Plans were jointly developed by IFAD ESA Regional Division and Farmers’ Delegates and represent a joint commitment that will guide IFAD/FOs country, regional and global level partnerships after validation and endorsement by the IFAD team; this action plan will serve the period between November 2022 and end of 2024. The progress will be reviewed during the Global Farmers Forum to be held in 2024.