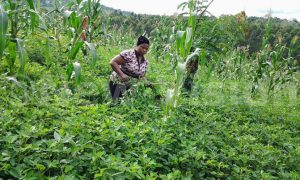 Smallholder farmers under the Eastern African Small-scale farmers’ forum (ESAFF)-Uganda, have launched a nationwide campaign to compel politicians and political parties to make agriculture a priority in their manifestos.

ESAFF chairperson, Hakim Baliraine, said all candidates should make agriculture a priority in the coming elections because even though it is the back born of the country’s economy, it has not received enough attention.

“The Agriculture sector has never got enough recognition during campaigns, and as we know, it is poorly funded by the government, leading to its poor performance. Now is the time to bring on board all political players in the coming elections, to ensure that our issues are heard and given deserving attention. It is the reason we are appealing to all aspiring candidates to put agriculture on top of their agendas in the ongoing campaigns,” he said.

He said given the struggles the sector has faced such as the weather changes, diseases, vectors and pests like locusts, and the COVID-19 pandemic, politicians should give it attention to ensure food security.

He said small-scale farmers, pastoralists and fisherfolks have continually lacked access to essential resources such as land, seeds, access to cheap credit, education, machinery, justice and basic services, which need to be prioritised before the new term.

The Ugandan government recognises agriculture as a source of growth, employment and poverty eradication in the National Development Plan II and the Vision 2040.

The sector contributes approximately 22.5% to the national gross domestic product (GDP), according to records from the Uganda Bureau of Statistics (UBOS).

It also employs more than 70% of Uganda’s population, and it is a major player in the country’s income per capita distribution.

The Programs Officer, Research and Policy Bagaga Ronald said small scale farmers should be prioritized because they play a big role when it comes to food production.

“It is no secret that small-scale farmers produce over 80% of the food in the world and are the custodians of seed and plant germplasm. Small-scale farmers make up the largest proportion of the agriculture sector in Uganda and employ over 75% of women. Therefore, we need our issues to be given attention by incoming politicians so that we can continue servicing the country,” he said.

Uganda is among the African countries that signed International protocols on Agriculture such as the Malabo Declaration, Paris Agreement and the United Nations agreement on Family farming.

Among the key issues enshrined in the UN agreement on family-farming is the protection of the rights of peasants, an increase in financing to the sector and access to agriculture insurance and credit.

Bagaga said for those key issues to be archived, we need to increase the investment in the Agriculture sector. He said currently Uganda is investing about 2.35% of the budget in the sector.

He said Integrating farmers’ manifesto in the manifestos of the candidates would be a clear recognition of the fundamental role of small-scale farmers, pastoralists and germplasm in this country who work hard to make a living and feed the whole nation.