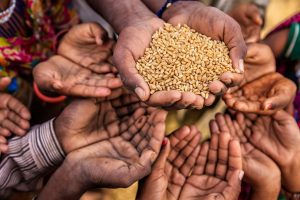 In September 2015, all member states of the United Nations adopted the 2030 Agenda for Sustainable Development. It laid down the 17 Sustainable Development Goals (SDGs) with a total of 169 targets to meet in 15 years in order to “end poverty, protect the planet and ensure that all people enjoy peace and prosperity by 2030.”

According to the statement issued by the global food sovereignty movement (PCFS), five years through, however, the first quadrennial Global Sustainable Development Report (GSDR) projected that based on the Global Monitoring Framework, majority of the goals “may be reached with some additional effort” – including Goal 2 or Zero Hunger – and several have a negative long-term trend. It noted desired results in some of the indicators, but their “progress is too slow to meet the target.”

The Peoples Coalition on Food Sovereignty based in the Philippines says that the UN Food and Agriculture Organization reported the same: the majority of the indicators for four SDGs under its mandate are off track, especially Goal 2 with all except for one of its indicators bearing the red label.

ESAFF is a member of the PCFS whose African secretariat is in Lusaka, Zambia.

The statement says “indeed, the world is not on track in ending global hunger and malnutrition”.

According to the State of Food Security and Nutrition in the World 2019, more than 820 million people (one in every nine) in the world were still hungry in 2018 and over 2 billion people (one in every four) do not have regular access to safe, nutritious and sufficient food. About 149 million children are stunted despite the 10% decrease in the past six years. Close to 400 million are estimated to be overweight and obesity is contributing to 4 million deaths globally.

The report also said that for every 10 hungry people, six are from Asia and three are from Africa — which means 90% of the world’s hungry are from these regions. South Asia remains to have the highest hunger prevalence with almost 15%. There is also slowly rising hunger in Latin America and the Caribbean, although its prevalence is still below 7%.

According to the 2019 Global Report on Food Crises, more than 113 million people across 53 countries experienced acute hunger in 2018. Two-thirds of them were in 21 countries and territories affected by conflict or insecurity, many of which are in West Asia and Africa.

With the way things are, USDA estimates that the number of food-insecure people will fall from 782 million to 446 million until 2028 – a far cry from Zero Hunger.

The GSDR 2019 proposes “science sustainability” in order to catch up with the SDGs and achieve all their targets on time. The government, the private sector, civil society, academia, communities, and individuals should work together on the six identified entry points, which include the “transformation” of food systems and nutrition patterns, with science and technology as the center point. The stress on science is due to the significant consideration of environmental factors and climate change.

In all the cited reports, the decisive actors – the states and the businesses – are urged to align themselves to the SDGs by channeling their funding and capital to the social welfare of the marginalized, such as the improvement of small-scale food producers’ production and income. Rising inequality was noted, but only as a trend and threat to the timely realization of the SDGs. Such proposals fell short in identifying the accountability of the states and the private sector in the global hunger situation. On the contrary, the cited reports even recommend increasing their role in the development sector for Zero Hunger to be feasible.

Global inequality is the driving force of hunger, and corporate monopoly in food and agriculture is Zero Hunger’s biggest hurdle. People’s food sovereignty is out of the picture.

The press statement says, in particular, transnational corporations continue to monopolize the seed and pesticide industry. The concentration of their control and ownership of vast hectares of land is expanding for industrial monocrop agriculture, especially for biofuels. Trade dependence on food contributes to a lack of access to food. False solutions are provided through corporate social responsibility to deter real and people centered solutions.

We highlight Africa, where TNCs shape much of the region’s agriculture that provides for almost a third of its Gross Domestic Product, demanding policy change to enable continued investment. In Latin America, the expansion of the biofuel industry drove the Amazon fires. The rice crisis in Asia is a result of trade liberalization and import dependence. Starvation in West Asia and North Africa is intended as a weapon of modern warfare.

While the regard to climate change is just as necessary, the efforts to combat it under the SDGs only exacerbates class inequalities. UN Expert Philip Alston projected that the rising income inequality, even in the best-case scenario, will lead to class-based climate apartheid, which could push 120 million more people into poverty by 2030.

“Unfortunately, the theme for this year’s World Food Day, – Healthy Diets for a #ZeroHunger World,- fails to capture the actual global situation”, says the PCFS statement.