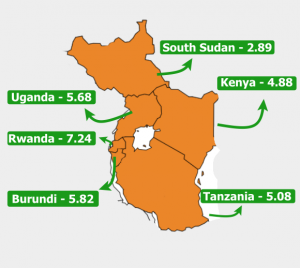 Rwanda is the only country in the region that surpassed the benchmark while Tanzania is ranked fourth among the six partner states.
Among the Malabo Declaration goals of the African Union (AU), the region scored poorly in enhancing investment finance in agriculture.

The six-nation bloc is also not on track in ending hunger by 2025 and enhancing resilience in climate change variability. This emerged on Friday during the fifth EAC Agriculture Summit 2020 on lessons learnt from the Malabo Declaration on the region's food security in the wake of Covid-19.The conference held through webinar reviewed the continent's performance on the 2nd Malabo Biennial Review Report 2019 released recently.

"In the EAC partner states, other five countries are not on track to achieve the Malabo Declaration goals by 2015," the conference was told.

Tanzania, the second largest economy, emerged fourth and scored 5.08 points, trailing Uganda (5.68 points) and second placed Burundi 5.82 points. Kenya, the largest economy in the region, ranked fifth with 4.88 points ahead of South Sudan at the tail with only 2.89 points.

EAC average is 5.27 points “which means the region is not on track,” the report said, attributing the scenario to poor investment in agriculture. Agriculture is a key sector in EAC economies, accounting for 25 to 44 percent of the partner states’ Gross Domestic Product (GDP and 80 percent of employment.

While more than 70 per cent of the industries in the region are agro-based, agricultural commodities constitute 65 per cent of the volume of intra-regional trade. The first AU Malabo Biennial Review Report was availed in Addis Ababa on January 30th, 2018 during the Heads of States Summit.

align class=”justify” ]The report assessed countries’ performance against the 47 indicators that were developed under each of the seven priorities. Overall, the region performed well in other commitments, including boosting intra-Africa trade in agriculture commodities and halving poverty through agriculture by 2025.[/gdlr_text_align]

The report insists the EAC partner states can achieve the critical goals of Malabo Declaration through increased investments in agriculture. Additionally, countries in the region need to increase resources to improve data systems "to adequately report on all Malabo indicators

The conference was organized by the East and Southern Africa Small Scale Farmers Forum (ESAFF) in collaboration with other partners including the East African Legislative Assembly (EALA).

Read the original article on Citizen.