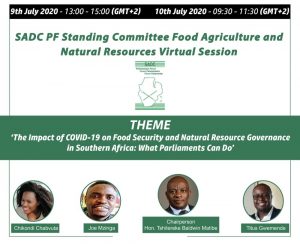 WINDHOEK – Members of Parliament who represent their countries on the SADC PF Standing Committee on Food, Agriculture and Natural Resources are cracking their heads over how to help revive the agriculture sector to ensure regional food security.

This, as evidence mounts that the on-going global Covid-19 pandemic has flung the sector within the SADC Region into a tailspin amid poor performance against set targets including the stipulations of the Malabo Declaration on Accelerated Agricultural Growth and Transformation for Shared Prosperity and Improved Livelihoods.

The parliamentarians – drawn from 13 of the 15 SADC PF Member States – virtually held their Standing Committee meeting last week. South African lawmaker Honourable Tshitereke Baldwin Matibe is outgoing chairperson of the committee. He said Covid-19-induced restrictions had been significantly disruptive to the global economy and had exacerbated the plight of millions of already vulnerable citizens.

He said: “This has resulted in mass production shutdowns, supply chain disruptions and drastic reduction in demand across all sectors of the global economy.”

He said although restrictions imposed as countries respond to Covid-19 were understandable from a public health perspective, they had disrupted the agriculture and extractive sectors with “serious ramifications on current and future production capacities”.

In the agriculture sector, he said, Covid-19 had disrupted food supply chain distribution networks, undermined nutrition and raised the spectre of a myriad of health challenges including “undernourishment, immune deficiencies, stunting and high child mortality rates”.

He noted that about 70 million people in five SADC countries (Malawi, Mozambique, South Africa, Zambia and Zimbabwe) were already food-insecure before the onslaught of Covid-19 due to drought.

“The coronavirus has aggravated the vulnerability of citizens of this (SADC) region, 40 per cent of who were already living in extreme poverty,” Matibe he said

“We are duty-bound as parliamentarians to call on governments and donors to urgently intervene and help the vulnerable household in our region,” he said.

He advocated for grants to help affected people buy food and inputs as governments help communities build resilience. He called, also, for the strengthening of national and regional grain reserves and for food processing and storage facilities to be taken closer to the people.

Chabvuta said for the past five years the SADC region had borne the brunt of many natural disasters that include cyclones, droughts, flash floods, erratic rainfall patterns and pest infestations that had impacted negatively on food security.

She said: “Women and children are the most impacted. We have seen rising levels of malnutrition among children and with the closing of schools due to Covid-19, some children that were getting food rations (have been left in limbo).”

She said Covid-19 hit many communities when they were still recovering from many natural disasters and bracing for lower crop yields.

On women’s rights, Chabvuta said there had been a spike in cases of sexual exploitation “within and across borders as women move in search of food”. Additionally, there had been an increase in unpaid care work associated with the closure of schools.

Chabvuta recommended that parliaments support provision of short term- social protection programmes, promote sustainable agriculture that is resilient to shocks, work with local women’s groups to promote and advocate for accountability in all response work and advocate for a regional approach to building transformative resilience to emergencies.

She said parliaments could also support community-led preparedness and response plans that are funded by local councils while ensuring social accountability in the use of public funds earmarked for relief efforts.

Mzinga enjoined parliamentarians to familiarise themselves with the Malabo Declaration on Accelerated Agricultural Growth and Transformation for Shared Prosperity and Improved Livelihoods and support full compliance.

He said the recent Biennial Review Report on the implementation of the Malabo Declaration showed that many SADC Member States were yet to walk their talk on strengthening the agriculture sector.

The seven that have signed the Agreement are Angola, DRC, Lesotho, Mozambique, eSwatini, Tanzania and Zimbabwe. Under the Agreement, Member States were to contribute an initial capitalisation of US$120 million payable in equal installments over three-years starting from 2017/2018 financial year.

Mzinga urged MPs to play their role so that SADC members fulfill their seven Malabo Declaration commitments and allocate progressively at least 10 per cent of public expenditure to appropriate and high-quality agriculture and nutrition support by 2025 and ensure full and timely disbursement of allocated budgets.

Botswana MP Polson Majaga described Covid-19 as a “wake up call”. He called for a review of all policies and the educational sector “from primary to university” so that the latter produces fit for purpose human resources. On food security, The MP called for “regional hubs”.

From eSwatini, Hon Strydom Mpanza concurred and called for reform of the education sector “so we exploit our resources like minerals”. He said that requires “engineers”, not people who pass or “speak English”.