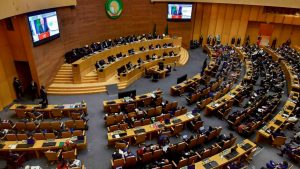 In a two-day webinar ahead of the EU-AU summit, activists heard that key priorities for Africa, including debt relief and progressive trade rules, are unlikely to be met under the current negotiation framework.

Jane Nalunga, an expert with Seatini, an NGO which works to promote fair-trade in Eastern and Southern Africa, accused the EU of “balkanisation” by “forcing” individual African countries to sign bilateral Economic Partnership Agreements (EPA).

These EPAs, she said, undermine the African Continental Free Trade Agreement (AcFTA) which came into effect in 2021 but is yet to fully get off the ground.

She cited an example of the East African Community where, instead of negotiating with the regional trade bloc, the EU had strong-armed first Kenya, and then Tanzania, to sign bilateral EPAs with it.

Part of the problem, according to Dr Chiek Tidiane Dieye, the founder and executive director of the African Centre for Trade, Integration and Development, is that the AU teams often lack a coherent set of minimum economic positions during negotiations.

Unlike the EU where the political project followed economic integration, the AcFTA is coming more than half a century after the Organisation of African Union, the precursor to the AU, she noted.

The lack of a strong united bargaining position makes Africa vulnerable to poor deals and changes in agreed positions, she noted.

For illustration, she noted that aid promises made by the developing world to the continent had been diverted to Covid vaccines, often at higher price points, reducing financial inflows into Africa.

This could worsen the debt situation on the continent where about 16 countries in sub-Saharan Africa have issued $137 billion in Eurobonds, and where about $40 billion in debt repayment is due in the near term.

Daniel Bradlow, a professor of international development law and African economic relations at the University of Pretoria said during the webinar that the multilateral nature of Africa’s debt, including commercial lenders and non-Paris Club lenders like China, made negotiations for relief more complicated.

“Unfortunately there is no international framework for renegotiating commercial debt so it is voluntary and unpredictable,” he said. “You have to get everybody to agree.”

He added that while African countries should, ideally, be negotiating as a collective, many put sovereignty ahead of unity, undermining their ability to get better terms.

Prof Bradlow noted that traditional approaches of asking for debt relief and debt cancellation of the continent’s debt stock of $700 billion might not meet the continent’s financing needs, which include $300 billion a year to invest in meeting climate change and sustainable development goals of addressing poverty and inequality.

Alternative strategies, Prof Bradlow said, include “shaking up dynamics on the creditor side, especially bond-holders” by setting up funds to buy up the debts of vulnerable economies to de-risk them and reduce the cost of finance, pegged to guarantees, including in the use of debt proceeds.

Some of the issues that civil society activists said the summit in Brussels should focus sharply on include more equitable distribution of Covid-19 vaccines, more progressive policies on migration, as well as peace and security arrangements which prioritise the interests of African citizens, not those of African leaders and their western allies.

Covid-19 has posed unprecedented challenges, with countries diverting reserves, delaying repayments or borrowing to respond to the pandemic.

“This vicious cycle—debt leading to default leading to draconian cuts in public services leading to more debt—has laid bare the dysfunction and injustice of the current global financial architecture,” a briefing paper released ahead of last week’s webinar said.

Civil society actors say the global response to the pandemic has exposed the inequalities in the AU-EU partnership. They accuse European countries of hoarding and failing to deliver on promised vaccines, as well as blocking the suspension of intellectual property rules to allow developing countries to manufacture the vaccines themselves.

They add that the G20 Debt Service Suspension Initiative, designed to free up cash in developing countries to fight Covid-19, which ended in December 2021, was “inadequate and short-term”, with only about $33 billion of around $650 billion in additional special drawing rights allocated by the International Monetary Fund coming to Africa.

“The upcoming summit thus avails us the opportunity to engage on debt and economic recovery for all our citizens, especially the most vulnerable (women, children and youth). It also focuses the AU and the EU on prioritising policies with impact on lives and livelihoods, health, access to vaccines, reinvestments in health infrastructure, education, energy and the economies of member states from the two continents,” the civil society activists said.

Call for Expression of Interest for a consultancy work to evaluate implementation and performance of the project titled “Strengthening small scale farmers voices in influencing and monitoring the implementation of the AU Malabo Declaration Goals in Eastern and Southern Africa in short (INFLUENCE III).
Small Scale Farmers in EAC and SADC Communique/ Position on COVID-19
Communique online conference on Impact of COVID19 on small-scale farming
Fundraising and Advocacy Officer required in Morogoro
Accountant Required in Morogoro