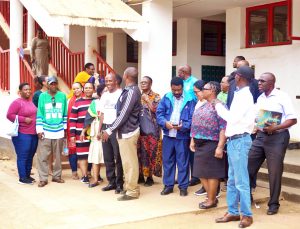 The Eastern and Southern Africa Small Scale Farmers Forum celebrated her 20 years of existence recently. The event reached its climax end of August 2022 in Tanzania.

The journey of ESAFF birth started back in 2001 during PELUM’s Biennial General Meeting (BGM) in which members conceived the idea of organizing the smallholder farmers convergence (SFC) along the World Summit on Sustainable Development that was held in South Africa in September 2002.

Speaking at the award ceremony, ESAFF chairperson Mr. Hakim Baliraine said that ESAFF and its 2.4 million members appreciate a solid foundation that was laid by previous board members led by ex- chairpersons.

During the celebrations of ESAFF at 20, farmers awarded the then PELUM Association General Secretary, Dr. Mutizwa Mukute for pioneering the birth of ESAFF back in 2001 and Mr. Stephen Ruvuga the CEO of MVIWATA for life time support to ESAFF.

PELUM Association organized the convergence of farmers and caravan from Lusaka and Harare to Johannesburg while MVIWATA hosted and supported ESAFF since it was registered in Tanzania in 2007.