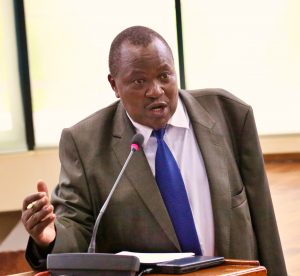 Smallholder farmers across the East African Community (EAC) partner states have expressed shock and grief over the passing on of Hon. Mathias Kasamba the representative in the East African Legislative Assembly (EALA) and ex-Chairperson of the Agriculture, Tourism and Natural Resources Committee (ATNR).

Hon. Mathias Kasamba an East African of Ugandan origin was elected to represent his country to the EALA’s fourth assembly (2017- 2022).

He untimely passed on, April 27th, 2021 at Nakasero Hospital in Kampala where he had been hospitalized.

Rt Honorable Ngoga said this is a boundless misfortune to the agricultural fraternity and to the EAC region as a whole as it has lost a champion who fought for the passing of the Malabo Declaration in EAC.

ESAFF chairperson Mr. Hakim Baliraine says the late Kasamba will be remembered for standing in the frontline to support the smallholder farmers’ petition which was signed by over a million farmers from across EAC to demand EAC states make it mandatory (legal requirement) as from 2019/2020 budget to allocate not less than 10 percent of the national budget to the agriculture sector for the benefit of over 130 million small-scale farmers. He added that the late Kasamba supported to handle the petition to the EALA house for discussion and deliberations. The late Kasamba also  championed for the EAC organs to implement and domesticate the African Union decision which was passed by the Heads of State and Governments on Ecological Organic Agriculture Initiative (EOA-I) in 2011, which supports organic agriculture and adoption of climate Resilience sustainable agriculture practices, vital for the smallholder farmers.

Hon. Kasamba had set a very high standards in the pursuit to bring development for farmers. He believed in their development as the leading production sector which employs majority in the region and he worked hard to ensure a more sustainable environment for agriculture development in the region.

“He will be missed for his commitments in actively looking for solutions to challenges that face the smallholder farmers in and for actively keeping agriculture at the top of Regional Development Agendas.” Mr. Hakim Baliraine, the Chairperson ESAFF said